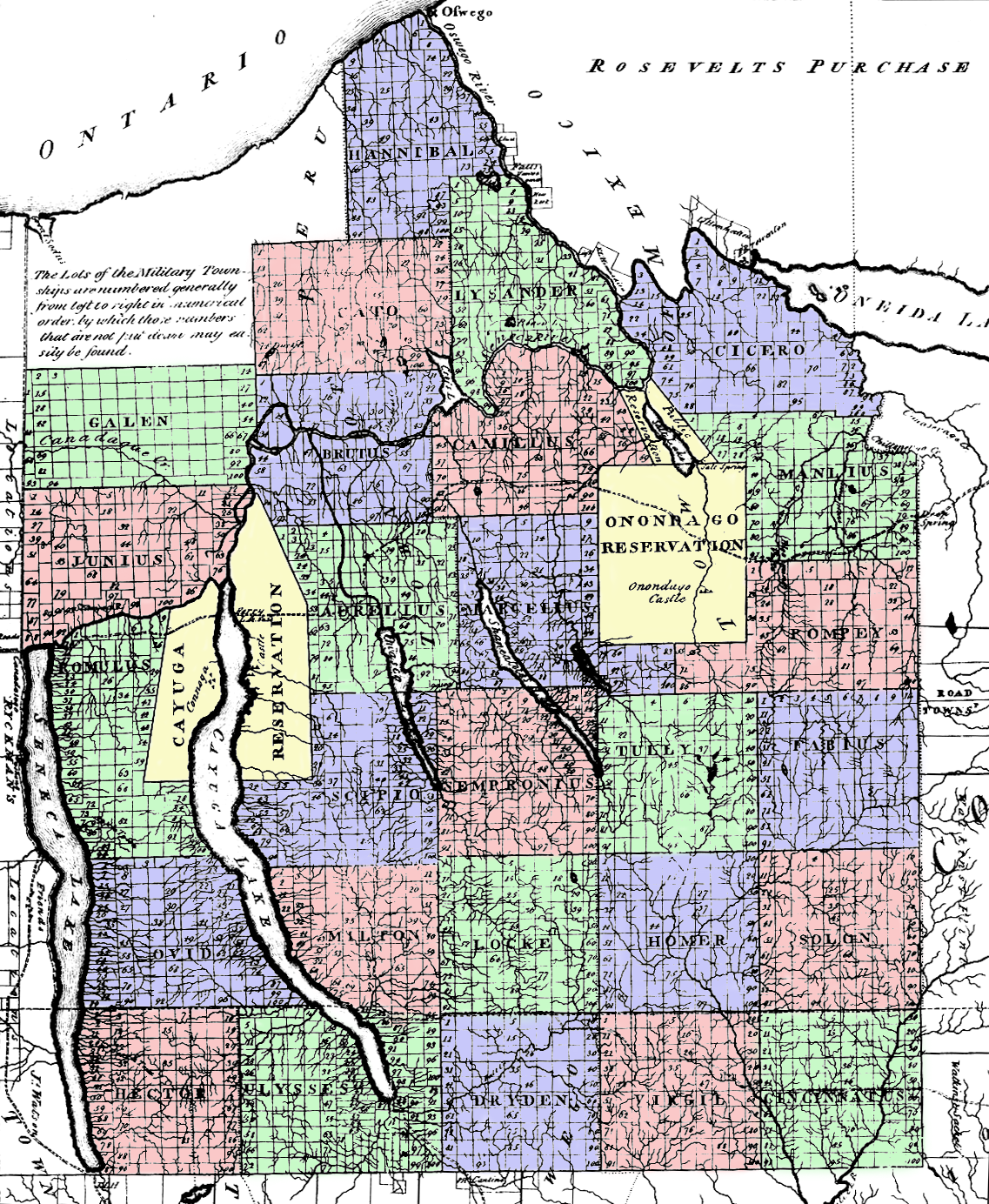 The Military Tract of Central New York was comprised of 2,700 square miles (1.75 million acres) of bounty land set aside to compensate New York’s soldiers after their participation in the Revolutionary War.

The United States Congress had already guaranteed each soldier at least 100 acres at the end of the war, but by 1781, New York had enlisted only about half of the quota set by the U.S. congress and needed a stronger incentive. The state legislature authorized an additional 500 acres per soldier, using land from 25 Military Tract Townships to be established in central New York State. Each of the townships was to comprise 100 lots of 600 acres (1 sq. mile) each. The lots were numbered 1-100 in rows of 10 starting with lot #1 in the northwest corner of the township. (not to be confused with current central NY Towns).

The land was parcelled out in a lottery, and the soldiers could do whatever they wished with the land – sell, trade, move in, pass on to heirs, or nothing. Soon the land was settled and became part of the first westward expansion of the United States. These original settlers were most likely veterans of the Revolution, or heirs of veterans, or knew someone who had been a soldier.

This is an 1829 map of Tompkins County, NY. It identifies some of the townships as well as the lot numbers that were used in the bounty lands lottery. These lots are one square mile each (600 acres) and if you look at the area on Google Satellite today you can still see the squares etched into the landscape.

I can identify 26 (of a possible 32) of my 4th great-grandparents who came from Massachusetts, Connecticut, New York and New Jersey to settle these bounty lands in the early 1800s. Most settled in the townships of Dryden, Ithaca, Newfield, Catherine, and Hector. Some of these families can be traced back into Colonial America to the very beginnings of Anglo-European settlement in North America from 1621-1640. All existed in America prior to the American Revolutionary War.

Through various online resources I can pinpoint the actual locations where my ancestors lived their lives throughout the entire 19th century. Arriving in the area as early as the late 1790s, and leaving in 1912 when Clyde Davenport married Hazel Hanshaw in Freeville, NY and promtly moved to the Albany area. However, Grandma returned to give birth to her first two children, Francis Russell “Dave” Davenport and Clara Louise Davenport, in Freeville.

Freeville was lot #26 in the town of Dryden. Almost all of my 19th century ancestors on my grandmother Hazel’s side lived in Freeville or within 5 miles of Freeville.

Here is a brief list of ancestral names on my grandmother’s side and the lots in which they settled.
Hanshaw – Dryden lot 51
Hill/Barcroft – Dryden lot 6
Hart/Stout – Groton lot 98 or 99

The Davenports that I descend from originally settled in the township of Dryden. My second-great Grandfather, Stephen Davenport (1831-1895) married into a renowned family from Cayutaville, and my first-great Grandfather, Fred Davenport (1866-1933) married into a renowned family named Everts from the Watkins Glen area in the township of Hector. Fred lived most of his adult life and raised his family in and around Watkins.

Here is a brief list of ancestral names on my grandfather’s side and the lots in which they settled.
Davenport – the 4 corner convergence of Dryden lots 52, 53, 62, 63.
Everts – Hector lot 41

So that’s basically it. In the very early 1800s a good portion of my ancestors relocated from other parts of Colonial America to the Finger Lakes region of New York along this 50 mile line from Hector to Cortland. In 1912, my grandparents, Clyde Burton and Hazel Louise (Hanshaw) Davenport moved out of the area.

Note: Hanshaw road goes from point E to point F. It was named after my 3rd great-grandfather, James Hanshaw (1790-1870). The home he built in 1825 still stands at 15 Sapsucker Woods Road, just off of Hanshaw Road.