This beautifully written work tells the story of Freeville, NY. The author, Albert Genung, grew up next door to my Grandmother, Hazel. He was 3 years older making him the same age as Hazel’s brother, Halsey. Mr. Genung’s father, Homer Genung, was Freeville’s doctor. 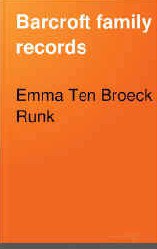 Barcroft Family Records:
An Account of the Family in England and the Descendants of Ambrose Barcroft, the Emigrant, of Solebury, Pennsylvania (Google eBook)
Emma Ten Broeck Runk – 1910

This genealogical work gives us ancestral information starting with Grandmother Hazel Hanshaw and linking her directly to an ancestor in England who apparently began a 25 year-long spat with William the Conqueror around the year 1068.

The authur, Emma Ten Broeck Runk is a distant cousin of mine. Her Grandfather, Ambrose Barcroft, was the brother of my 4th great-Grandmother, Sarah Hill (Barcroft) (1788-1874). We have scans of letters that Emma Runk sent to Libby Mineah who was a sister of my Great-Grandmother, Louise Hanshaw (Hill). Emma’s mother, Fanny Runk (Barcroft), lived with my 4th great grandparents, Joseph and Sarah Hill for a year while she attended the Dryden Academy.

Find A Grave
FindAGrave.com –  is what it says it is. We have been able to locate many of the gravesites of my ancestors. Somtimes, Find A Grave can be a very valuable resource in tracking my family history. This presentation of my Fourth-Great Grandfather Amos Hart is a good example.

Old Fulton New York Postcards
Fultonhistory.com – This is 19th and early 20th century Upstate New York Facebook. This is a searchable PDF database linking you to 19th and 20th century newspapers that have been scanned – usually from microfiche. Here is a perfect example from the CORTLAND STANDARD MONDAY. EVENING AUGUST 1, 1904. A brief article on “Brisk Piano Trade at Mahan’s” and mentioned is the purchase of a Kaufman Colonial piano by Louise Hanshaw – My great-grandmother. The date of the paper is August 1, 1904. Two weeks before Hazel’s 10th birthday. 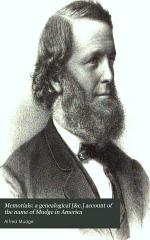 Memorials: a genealogical account of the name of Mudge in America
This work traces the Mudge name back to 1638 in America. You may download a free Google Ebook here.