The story of my Colonial American ancestors begins with Thomas Davenport who was born in 1615, probably in the county of Devon, England. Sometime in the later part of the 1630s he and his wife Mary arrived in Boston and settled in Dorchester as part of what is now referred to as “The Puritan Migration to New England (1620-1640).” These twenty years led in a migration that saw over 20,000 people, primarily in family units, leave England for a new life in New England.

The story of my post-Colonial American ancestors begins with John Davenport (1741 – abt. 1827) and his four eldest sons, Hezekiah, Thomas, John, and Humphrey. The exact path that they took through the years of the Revolutionary War is not very clear. They began as a family in the 1760s in Little Compton, RI. According to tax records from 1799-1803, and early U. S. census reports from 1790 – 1810, John Davenport, his wife, and four adult sons had removed to Pittstown, NY (near the Saratoga battlefields) after the Revolutionary War. John Davenport, Sr. and Ruth _____ ( abt. 1738 – 1830+) spent the last twenty-five years of their lives in Pittstown, NY.

Sometime in the 1810s, 1820s, and 1830s Hezekiah, John, Jr., and Humphrey Davenport removed with their families — including some grandchildren — to “Turkey Hill” near the hamlets of Varna and Etna in the Town of Dryden, NY. Thomas and his wife, Anna, came to Turkey Hill sometime in the 1830s. It appears that they had remained in Pittstown with his parents, John, Sr. and Ruth Davenport. The 1830 U. S. census for Pittstown, NY, showed a female over the age of 90 living in the Thomas Davenport household. 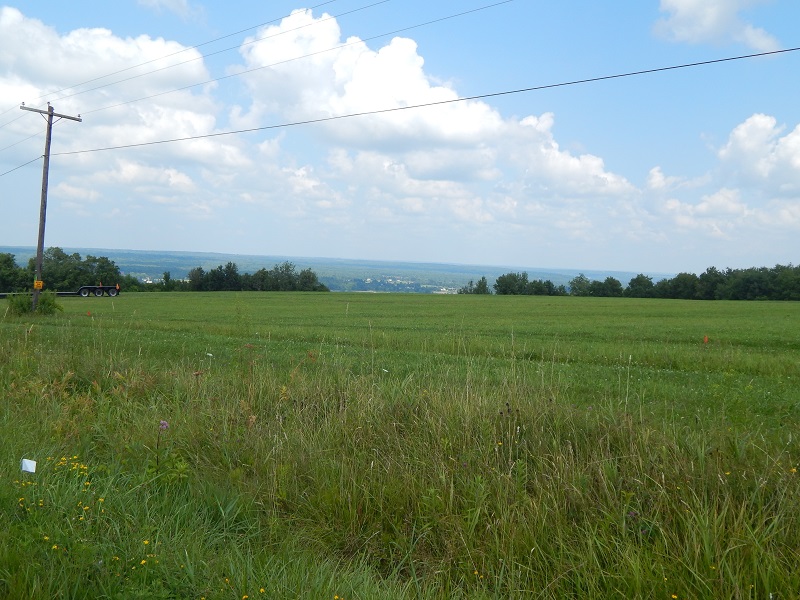 Alanson and John G. Davenport, two sons of Thomas and Anna Davenport, moved their young families from Pittstown to Dryden with their uncles, Hezekiah, John, Jr., and Humphrey Davenport in the 1820s. Hezekiah, Thomas, and John, Jr., hree of the four sons of John Davenport, Sr., were buried in Robertson Cemetery which is on land that borders some of the fields that the Davenports tended on Turkey Hill.

It is unclear what migration path John Davenport, Sr. and his sons took from Little Compton, RI, to Pittstown, NY, and on to Turkey Hill in Dryden, NY. John Davenport, Sr., who was born in 1741, was 35 years old at the time that the Revolutionary War began. His eldest son, Hezekiah, was born in 1767 which means he would have been only fourteen or fifteen years old in 1781 when the Revolution was winding down in New England and moving south to Yorktown.

John, Sr.’s father, Oliver Davenport (1713/14 – 1790), had removed from Little Compton to Coventry, CT and was raising a family with his second wife, Mary Devol of Little Compton, in the 1760s. It is possible that John, Sr. moved to Coventry with his father and step-mother. Benjamin Davenport, John, Sr.’s half-brother, was born in 1763 only four years before the birth of John’s own son, Hezekiah.

Coincidently, another of my 5th great-grandfathers, Daniel Everts (1749-1833), was a corporal under Captain David Humphreys in Col. Return J. Meig’s 6th Connecticut Regiment. Daniel Everts settled in the Town of Hector, NY, in the years following the war and one of his fellow settlers from Salisbury, CT was Richard Ely, the brother of Captain Elisha Ely. In 1890, a little more than one hundred years following the Revolutionary War, Fred Seward Davenport, the 2nd great-grandson of John Davenport, Sr., and Clara Hurd Everts, the 1st great-granddaughter of Daniel Everts, would be married in Montour Falls, NY. Through his service in the 6th Connecticut, John Davenport, Sr. may have earned bounty land as payment for his time served. He may have sold or traded this bounty for land in Pittstown, NY.

Whatever the path had been, page 7 of the 1801 tax records for Pittstown, NY lists John Davenport, Sr., John Davenport, Jr., Hezekiah Davenport, Thomas Davenport, and Humphrey Davenport. Their combined personal property for tax purposes was more than $2,700 or about $50,000 today. It is probable that their combined farmlands were worth considerably more.

According to 1820, 1830, and 1840 U. S. Census reports for Tompkins County, NY, all four Davenport brothers lived on Turkey Hill in Dryden, NY, but never did all four live there at the same time. John Davenport, Jr., is the only one whose name appears in the 1820 census. John, Jr., Hezekiah, and Humphrey, all appear in the 1830 census as do two of Thomas’s sons, John G. Davenport and Alanson Davenport my 3rd great-grandfather. John, Jr., and Thomas appear in the 1840 census reports as does his son, Alanson and his young family. John G. Davenport moved back to Pittstown after his first wife died, but his son, Warren Davenport (1823-1894) remained in Dryden.

6. Thomas Davenport (1769 – 1847) — 4th great-grandfather
Thomas Davenport was born in Little Compton, R.I. on February 3, 1769. After the Revolutionary War he moved with his father, John Davenport, and settled in Pittstown, NY. He and his wife, Anna ______ (1777 – Nov. 2, 1847) were married in Pittstown in Rensselaer County, NY. After the death of his mother in the 1830s, Thomas and Anna removed to Turkey Hill in Dryden, Tompkins County, NY. Thomas Davenport died on 10 Sep 1847, only two weeks after his brother, John Davenport, Jr. Thomas and Anna (who passed less than two months after Thomas) are both buried in Robertson Cemetery which is adjacent to the land that was tended by the Davenports for a good portion of the 19th century. Children of Thomas and Anna Davenport were:

i. Daniel Davenport born 1827 possibly in Dryden, NY. The place of birth is being derived from the fact that Nelson Davenport, a son of John G. Davenport, is known to have been born in Dryden in 1827. It is likely that Daniel’s father, Alanson came to Dryden from Pittstown with his brother, John G. Davenport, possibly a year or so before 1827. Daniel married Jane Lupton and together they had two sons, Morris born 1851 and Frederich born 1855.

ii. Stephen A. Davenport born 1831 in Dryden, NY, married about 1863 Maria L. Sherwood daughter of Amaziah Sherwood and Lucy Ann (Beebe) Sherwood of Cayutaville, NY. He died in Dryden, 1895, and is buried next to his wife who died in 1925 in Willow Glen Cemetery in Dryden, NY.

8. Stephen A. Davenport (1831 – 1895) — 2nd great-grandfather
Stephen A. Davenport was born in Dryden, NY in 1831. Around the year 1855 when Stephen was 24 or 25 years old, he sold his land holdings on Turkey Hill in Dryden to his cousin, Anthony Davenport of Pittstown, NY. Anthony removed to Dryden and lived near his brother, Warren Davenport, and his cousins, Daniel Davenport and Charles W. Davenport, and his uncle and aunt, Alanson and Hannah Davenport. Stephen Davenport moved to Cayutaville near Mecklenburg in Hector, NY. There he became a carpenter and found work building and repairing carriages and wagons. In 1863 he married Maria L. Sherwood the daughter of Amaziah Church Sherwood (1815-1860) and Lucy Ann (Beebe) Sherwood of Cayutaville, NY. They moved back to the Davenport farms in Dryden, NY where they raised their offspring:

ii. Elmer Davenport was born April 1865 and is listed with the Stephen and Maria Davenport household in the 1865 New York State Census. He died at a very young age and is not listed in any other census.

v. Edna Mae Davenport (1874-1936) was born in Dryden, NY. In 1895 she married John E. Edsall and they settled in the Village of Freeville, NY. In 1898 Edna (Davenport) Edsall gave birth to twins, Bertrice and Beatrice. Bertrice married Hugo Christian Rabinowitz from Hawaii. It is likely that Clyde Burton Davenport boarded with his Aunt Edna in 1910 when the Lehigh Valley Railroad promoted him to the position of night telegraph operator in the train station at Freeville.

vii. Lucy Ann Davenport (1879-1964) was born in Dryden and named for her grandmother, Lucy Ann (Beebe) Sherwood Culver (1822-1901). In 1901 she married George N. Hart (1867-1949) in the hamlet of Etna which is in the town of Dryden near the foot of Turkey Hill. They lived in Cuyler, NY in Cortland County and had a daughter, Belle Hart, who was born in 1907. George Hart was employed by the Lehigh Valley Railroad. Over the years there were many items printed in the Cuyler News indicating that the Clyde and Hazel Davenport family paid many visits to Aunt Lucy Hart in Cuyler.

9. Fred Seward Davenport (1866 – 1933) — 1st great-grandfather
Fred Seward Davenport was born on Turkey Hill in Dryden, NY. May 1, 1866 — about a year after the end of the Civil War and about a year before the purchase of Alaska. As I understand family lore, he was given the name Seward because their were beliefs that we were somehow related to William Henry Seward, former governor of New York and Secretary of State under Presidents Lincoln and Johnson. The only connection to the Seward surname that I can find is Loranna (Seward) Culver (1778-1858), the wife of Asa Culver and mother of Charles Culver of Cayutaville. Charles Culver was the second husband of my 3rd great-grandmother, Lucy Ann (Beebe) Sherwood Culver. The 1870 U. S. Census for Dryden listed a five year old Seward Davenport living in the Stephen and Maria Davenport household. This is the only time in a census report where Seward was used as his first name.

Fred met his wife, Clara Hurd Everts of Montour Falls, during a visit to his grandmother’s home in Cayutaville. Except for a couple of years in the early 1900s Fred and Clara spent most of their adult lives working fruit farms on Lake Seneca a few miles north of Watkins Glen in the town of Hector near the villages of Burdette and Hector. This is an area that Clara’s 1st great-grandfather Daniel Everts (1749-1833) had settled in 1792.

The last morning of Fred Davenport’s existence seems to have defined his life. Just after breakfast on Labor Day, Monday, September 4, 1933, Fred, Clara, and a boarder, John Shenrock, became embroiled in a domestic dispute concerning money for clothes for Fred and Clara’s ten year old grandson. A few months later John Shenrock was acquitted of manslaughter charges in the stabbing death of Fred Seward Davenport. Children of Fred and Clara Davenport were:

ii. Seward Aranthus Davenport (1893-1970), born in Watkins married Mary Pearl Collins of Elmira in 1915. As a young man Seward lived in Montours Falls and worked as an electrician for the Shepard Crane & Hoist Company. In 1940 he owned a Bowling Alley near his home in Roseville, MI. He died in Lupton, MI in 1970. Mary Pearl Davenport died in Lupton in 1972. The children of Seward and Pearl Davenport were: Martha L. b. 1915, and Fredrick Laster Davenport b. 1917

iii. Francis Davenport (1902-1902). Family lore tells of a child born to Fred and Clara Davenport in California who only lived for a few days or was possibly a still-birth.

10. Clyde Burton Davenport (1891 – 1976) — grandfather
Clyde Burton Davenport was born in Watkins Glen in 1891. He graduated from Watkins Glen High School in 1909 and seemed to get a job with the Lehigh Valley Railroad almost at the same time. Within a few years the Railroad had moved him from Watkins to Ithaca to Freeville, NY. In January, 1912 he married Hazel Louise Hanshaw, the daughter of Perry and Louise (Hill) Hanshaw of Freeville. The newlywed Davenports moved almost immediately to Albany, and Clyde Davenport’s 40 plus year career with the New York Central Railroad began. The Davenport family moved several times with stays in Albany, Chatham, Castleton, The Bronx, Brewster, Tarrytown and Croton. Clyde and Hazel Davenport retired to Sackets Harbor, NY. Eventually they acquired a small cottage with frontage on Lake Ontario directly across Sackets Harbor from Horse Island. They also set up winter quarters in a trailer park in Briney Breezes, Florida. They raised six children in all:

iv. Margaret Elizabeth Davenport (1923-2001) married Herbert Otto Kruger of Jackson Heights. They had 2 boys and I am one of them.